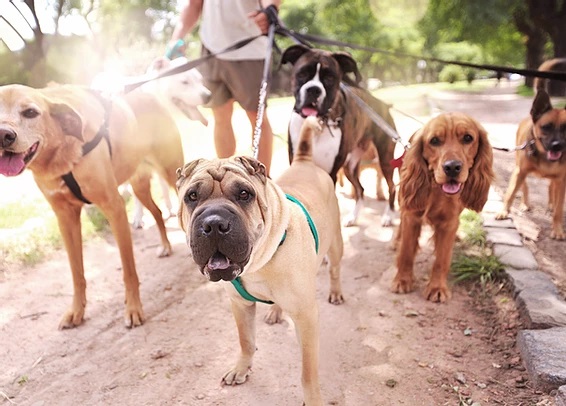 The very first time you put a lead on your new puppy you allow her to walk wherever she wants. You let her decide where she wants to go and follow meekly behind her holding on to the lead.

Your puppy has spotted a leaf fluttering by and decides that chasing the leaf is a great game. You try and keep up but inevitably as your puppy pounces and darts after the leaf, the lead goes tight. Pup is now experiencing pressure on her delicate little neck for the first time, and she does not like the sensation.

Instinctively she starts to fight against this pressure. Feeling trapped, she pulls to get away from the pressure. You hate to see her in distress, so you keep hold of the lead and follow. Trying to release the tension in the lead because you don’t want her to hurt herself.

Now fast forwards a few days. You are lead training your puppy again. Now as soon as the lead goes on, puppy tries to pull away. You put a little tension in the lead as you are trying to teach her to follow you, instead of you following her.

Your puppy remembers the pressure she felt on her little neck the first time she had the lead on. She didn’t like it, so she starts to fight against the force. You apply a little more tension to the lead to get her to come to you, and your puppy responds by fighting even harder.

One of two things is likely to happen here.

Scenario 1: She pulls and strains and shakes her little head and somehow, fighting against the pressure, she manages to pull out of her small puppy collar.

Wow, what a relief! All that nasty pressure is gone. Your puppy has now learnt that if she fights hard enough, she will gain freedom.

Scenario 2: Puppy pulls and strains and because you don’t want her to hurt herself you rush forward to release the pressure. Here your puppy learns that if she pulls you keep following her, so she gets to go wherever she wants to go, and she will get there quicker.

Every Action Has An Equal And Opposite Reaction

In both scenarios, we are dealing with this little instinct called Opposition Reflex. This is an automatic response, a reflex that causes us and our dogs to resist pressure with an equal (or greater) force.

Just think about what happens if someone leans into you, you don’t fall over, do you?

This is because of the opposition reflex, without having to think about it you instinctively match the force that is being put on you by the leaning.

Sometimes the solution to this problem can be as simple as preventing the opposition reflex from happening. This can be by changing from a collar and lead combination to a head collar or even a harness and lead combo. While changing the equipment you use can have a positive effect, it will not solve the problem in the long term.

This is because there are other reasons why dogs pull and if these are not addressed your dog will learn to pull on a harness and head collar too.

Teaching your puppy how to walk on a loose lead is what I talk about in my new book ‘No Pulling Allowed’. The Kindle book is now available from Amazon or you can grab a signed paperback copy from me by heading over to www.nopullingallowed.co.uk. The release date has now been confirmed as the 7th July 2019.